Type your tag names separated by a space and hit enter

Use of Bowel Preparation in Elective Colon and Rectal Surgery

The American Society of Colon and Rectal Surgeons is dedicated to assuring high-quality patient care by advancing the science, prevention, and management of disorders and diseases of the colon, rectum, and anus. The Clinical Practice Guidelines Committee is composed of Society members who are chosen because they have demonstrated expertise in the specialty of colon and rectal surgery. This committee was created to lead international efforts in defining quality care for conditions related to the colon, rectum, and anus. This is accompanied by developing clinical practice guidelines based on the best available evidence. These guidelines are inclusive and not prescriptive. Their purpose is to provide information on which decisions can be made rather than to dictate a specific form of treatment. These guidelines are intended for the use of all practitioners, healthcare workers, and patients who desire information about the management of the conditions addressed by the topics covered in these guidelines. It should be recognized that these guidelines should not be deemed inclusive of all proper methods of care or exclusive of methods of care reasonably directed to obtaining the same results. The ultimate judgment regarding the propriety of any specific procedure must be made by the physician in light of all of the circumstances presented by the individual patient.

STATEMENT OF THE PROBLEM

Bowel preparation has been used in colon and rectal surgery for a variety of reasons. A clean colon is thought to facilitate bowel manipulation, enable passage and firing of surgical staplers, and allow for intraoperative colonoscopy, if needed. The most studied and debated aspect of bowel preparation, however, is its role in reducing surgical morbidity, namely surgical site infections (SSIs). Colon and rectal surgery has among the highest rates of SSIs reported for all types of elective surgery, with recent reviews demonstrating rates varying from 5.4% to 23.2%, with a weighted mean of 11.4%.[1] Colorectal SSI rates are of particular interest currently because US hospitals are mandated to report rates of colorectal SSIs to the National Healthcare Safety Network.

A complete description of the evolution of bowel preparation as a means to reduce SSI is beyond the scope of this clinical practice guideline. Briefly, although William Halsted introduced the concept in the late 1800s, antiseptic technique was not widely adopted until well into the 20th century. After the development of aerobic and anaerobic cell culture, it became increasingly recognized that a high bacterial count in the colon was a source of SSI. Mechanical bowel preparation (MBP) was used as a means of decreasing intraluminal bacterial concentration in hopes of reducing infection rates. Eventually, nonabsorbable antibiotics were added to bowel preparations to further reduce intestinal bacterial content. By the 1970s, use of an MBP with both oral and intravenous antibiotics was generally accepted.[2]

In the late 20th century, data emerged suggesting that elimination of MBP does not lead to increased morbidity. The majority of these studies, however, did not include oral antibiotics. Recently, there has been a general trend of reintroducing oral antibiotics into preoperative MBP. Several surgical units have published results showing reduced SSIs after introducing SSI bundles that include MBP along with oral antibiotics.[3],[4],[5] This clinical practice guideline reviews the evidence for the various methods and strategies for bowel preparation in elective colon and rectal surgery. Link to access Supplemental Digital Content 1, Evidence Tables, http://links.lww.com/DCR/A794.

An organized search of MEDLINE, Embase, and the Cochrane Database of Collected Reviews was performed for the period of January 1, 1945, to March 1, 2018. The complete search strategy is included (Supplemental Digital Content 2, http://links.lww.com/DCR/A795). In brief, a total of 1516 unique journal titles were identified. Initial review of the search results led to the exclusion of 748 titles based on either irrelevance of the title or the journal. Secondary review resulted in the exclusion of another 441 titles considered irrelevant or outdated. A tertiary review of the remaining 307 titles included assessment of the abstract or full-length article. This led to exclusion of an additional 240 titles for which similar but higher-level evidence was available. The remaining 54 titles were considered for grading of the recommendations. A directed search of references embedded in the candidate publications was performed. Emphasis was placed on prospective trials, meta-analyses, systematic reviews, and practice guidelines. Peer-reviewed observational studies and retrospective studies were included when higher-quality evidence was insufficient. The final source material used was evaluated for the methodologic quality, the evidence base was examined, and a treatment guideline was formulated by the subcommittee for this guideline. The final grade of recommendation and level of evidence for each statement were determined using the Grades of Recommendation, Assessment, Development, and Evaluation system (Table 1).[6],[7] When agreement was incomplete regarding the evidence base or treatment guideline, consensus from the committee chair, vice chair, and 2 assigned reviewers determined the outcome. Members of the American Society of Colon and Rectal Surgeons (ASCRS) Clinical Practice Guidelines Committee worked in joint production of these guidelines from inception to final publication. Recommendations formulated by the subcommittee were reviewed by the entire Clinical Practice Guidelines Committee. Final recommendations were approved by the ASCRS Executive Committee. In general, each ASCRS Clinical Practice Guideline is updated every 5 years. 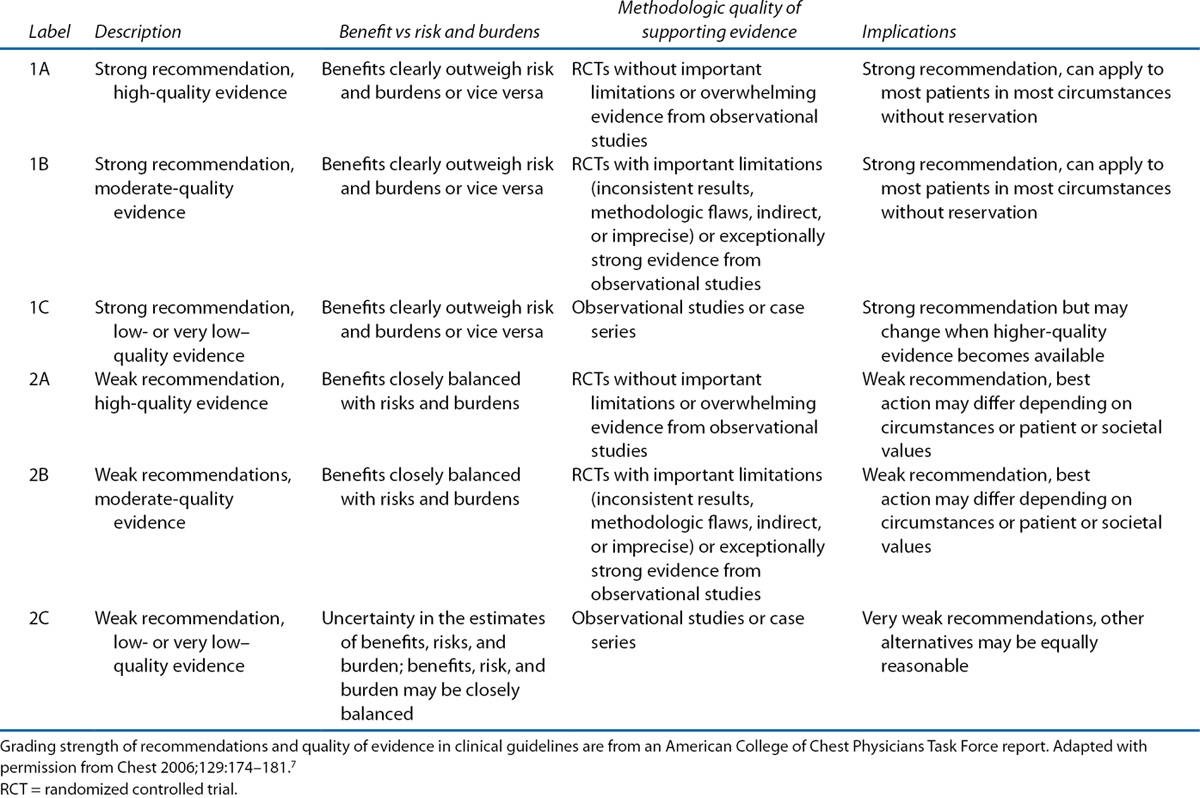 1. MBP combined with preoperative oral antibiotics is typically recommended for elective colorectal resections. Grade of Recommendation: Strong recommendation based on moderate-quality evidence, 1B.

Early studies examined the impact of preoperative enteral preparations on SSI, correlating cultures from colonic specimens and subsequent wound infections.[8],[9],[10] It became evident that appropriate antibiotic coverage of gut flora would require both aerobic and anaerobic antisepsis.[11],[12] The landmark prospective, randomized controlled trial and subsequent retrospective analyses by Nichols et al[13],[14] compared MBP with MBP plus nonabsorbable oral antibiotics and demonstrated a marked decrease in SSI with combination therapy. Thus, for >3 decades the combination of antibiotics and oral purgatives described in the original article and commonly referred to as the Nichols’ prep has been the most widely used manner of preparation before bowel surgery.[13],[14] Clarke et al[15] demonstrated a reduction in postoperative complications in patients who received both enteral antibiotics and MBP not only in overall SSI but also specifically in the incidence of anastomotic leak. The findings by Nichols et al[13],[14] and Clarke et al[15] were reproduced in a subsequent trial and were verified in subsequent meta-analyses.[16],[17] Multiple studies have also shown the benefit of combined MBP and oral antibiotics in reducing SSI rates, hospital length of stay, and readmission rates.[18],[19],[20]

In a retrospective study using data from the Veterans Affairs Surgical Quality Improvement Program including 9940 patients who underwent elective colorectal resections, oral antibiotics significantly decreased the SSI rate in comparison with no bowel preparation (9.0% vs 18.1%; p < 0.0001). Notably, only 7.3% of patients in the oral antibiotic group did not receive MBP. MPB alone, without oral antibiotics, resulted in a similar SSI rate to that seen with no bowel preparation (20.0% vs 18.1%; p = 0.81).[20]

As a special consideration, Clostridium difficile colitis occurs in ≈1% to 7% of patients after colorectal surgery.[26] A large observational cohort study using data from the Michigan Surgical Quality Collaborative-Colectomy Best Practices Project provides granular insight into the effect of bowel preparation on rates of C difficile colitis in a study population of 2475 patients. In this study, Kim et al[27] created a propensity-matched analysis of 957 paired cases (n = 1914) and compared patients receiving full bowel preparation (MBP with oral antibiotics) with patients with no bowel preparation. Patients who received oral antibiotics and MBP were actually less likely to develop postoperative C difficile colitis than those who received no bowel preparation (0.5% vs 1.8%; p = 0.01).[26],[27] In a retrospective study of 219 patients, Yeom et al[28] also found no difference in rates of C difficile infection in patients receiving nonabsorbable antibiotics versus those who did not (7.3% vs 6.4%; p = 0.803). Another small retrospective study involving 314 patients demonstrated higher C difficile toxin detection rates in colectomy patients who received oral antibiotics in addition to MBP (7.4%) compared with those who did not (4.2%; p = 0.03).[29] This study was limited by the small number of patients and the retrospective methodology.

However, in a recent randomized controlled trial of 310 patients divided into 3 groups comparing the use of MBP plus preoperative probiotics only, MBP plus preoperative oral antibiotics only, and MBP only in elective colon cancer operations, there were no differences in the rates of detection of C difficile toxin in stool samples obtained 1 and 2 weeks postcolectomy in any of the 3 groups (7.0% vs 9.1% vs 10.5%; p = 0.69).[30]

2. Preoperative MBP alone, without oral antibiotics, is generally not recommended for patients undergoing elective colorectal surgery. Grade of Recommendation: Strong recommendation based on high-quality evidence, 1A.

A Cochrane review from 2011 evaluated 18 randomized controlled trials including 5805 patients; 2906 received MBP alone, and 2899 had no preparation (no MBP). They also included trials comparing MBP with enema. There were no statistically significant differences in how well the 3 groups of patients (MBP alone, no MBP, and rectal enemas) did postoperatively in terms of anastomotic leak, mortality, peritonitis, need for reoperation, and wound infection.[31]

More recent evaluation using the NSQIP database also found no benefit for MBP alone.[32] Of 5021 patients who underwent elective colon resection, 44.8% had MBP only. Multivariate analysis demonstrated that MBP alone was not associated with a decreased risk of postoperative complications (anastomotic leakage, superficial SSI, organ space SSI, wound disruption, deep venous thrombosis, pneumonia, unplanned intubation, ventilator dependency >48 h, pulmonary embolism, cardiac arrest requiring cardiopulmonary resuscitation, renal insufficiency, sepsis, hemorrhagic complications, return to the operating room, urinary tract infection, prolonged hospitalization >30 d, or death) after right- or left-sided colon resections. There was no association of MBP alone with mortality, morbidity, or any of the aforementioned postoperative complications. This study is consistent with multiple previous studies showing no benefit of MBP alone in colorectal surgery, and it also showed a lack of harm. It is important to note that most studies also do not show a detriment from MBP compared with no MBP.[24],[32],[33],[34]

4. Preoperative enemas alone, without MBP and oral antibiotics, are generally not recommended for patients undergoing elective colorectal surgery. Grade of Recommendation: Weak recommendation based on moderate-quality evidence, 2B.

A number of small studies have evaluated bowel preparation using rectal enemas alone.[31],[34],[35],[36],[37],[38] Alcantara Moral et al[35] studied 193 patients in a single-center, prospective, randomized study wherein patients were randomly assigned to oral MBP or cleansing enemas only. Patients in the enema group had similar morbidity (wound infection or anastomotic dehiscence) as the MBP group.[35] Zmora et al[39] randomly assigned 380 patients to an MBP group or an enema group and also found no significant difference in the rate of surgical infectious complications between the 2 groups. On the other hand, Bucher et al[40] found lower rates of overall morbidity and anastomotic leak in an enema group when 153 patients undergoing low anterior resection were randomly assigned to MBP or enemas only. Platell et al[37] found an increased risk of anastomotic leakage with phosphate enema preparation versus oral polyethylene glycol. These studies, however, are limited by small sample sizes and unclear methodology. The paucity of data for rectal enemas as the only mechanism of purgative cleansing and the preponderance of data favoring combined mechanical and oral antibiotic bowel preparation further bolster the recommendation of combined oral MBP with oral antibiotics.

You can cancel anytime within the 30-day trial, or continue using ASCRS U to begin a 1-year subscription ($39.95)

Individual subscription from ASCRSLog in
A ASCRS U subscription is required to
Already have an account?Log In
Looking for full access to ASCRS U?
Purchase a subscriptionI’m already a subscriber
Feedback
Message
Preferred form of contact
Best time to call:
Send Message